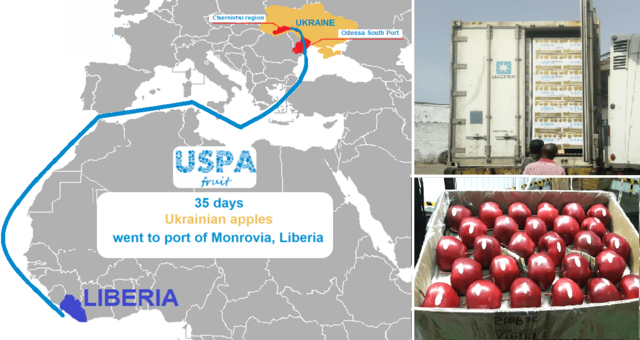 The 17th market opened by USPA fruit team was Liberia market. In November 2019, we delivered a large batch of apples, after which the company received confirmation of program deliveries to Liberia.
Liberia is one of the poorest countries in Africa and the world. The country’s economy has been hit hard by the civil war and the speaker regime of Charles Taylor. Вespite this, Africa’s trade and export potential is great and underestimated by many.
Exploring this market, we were found that Liberia has long been interested to cooperation with Ukraine in the agricultural sector. Liberian customers mainly require apples of small sizes (50-70mm) and red varieties. USPA FRUIT responded promptly to the needs of this market and did everything possible to complete export programs with Liberia. So, despite a very long transit time, thanks to strict technological control at each stage, USPA team managed to deliver good quality apples.

Some interesting facts about Liberia and Africa.
The amazing fact that in African country surprisingly were more women politicians than in Europe. The first female leader how become president of Liberia in 2004 was Ellen Johnson-Sirleaf. In 2011, she was awarded the Nobel Peace Prize for her contribution to the fight for women’s rights. Also interesting that the 25th president of Liberia in 2017 was George Weah, who was the best football player in the world according to FIFA, Europe (by France Football) and Africa in 1995.
The main seaport in Monrovia was built during the Second World War. Foreign companies built ports in Buchanan and Greenville. Through low taxes and registration fees, the world’s largest merchant fleet has been assigned to Liberian ports.
Although Africa remains one of the poorest countries in the world, at the moment it is a dynamically growing region of the world with an actively growing export market, particularly in the agricultural sector.